So, a quick update since I’m so far behind.

I sang a bit and played guitar as Alex…somethingoranother. I somehow forget the last name of my character but I was performing at the Eagle Tavern for Holiday Nights at the Greenfield Village for Christmas. It was a great deal of fun. Here’s a pic of a typical day for me up north at home and what I had to dress up as for the gig. (Alex Henry, I think that was my name).

I’m composing for my second video game called, Zombies Don’t Pay Taxes. Hopefully the developer likes what I come up with. It’s been fun so far.

Now onto a new project. One that makes me actually finish writing a series of songs because, there is a deadline. I am hoping to provide some behind-the-scenes footage and info into the process. So far it’s been fun and frustrating and creative and frustrating so be writing for the first month but, I still have some time. February is recording month so I do need to get going. I’ll hopefully give some details, as much as I can to how this all works for me. I know I need to write down some settings when I’m recording ideas. I’ve already made that mistake (my note to myself). Ok, back at it… 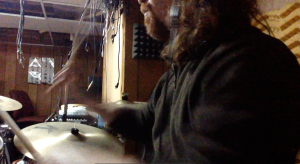