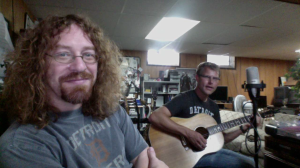 So, my good buddy, John and I hung out a bit today. That was fun. We worked on some Radiohead, Pink Floyd, some stuff I’ve never heard before by Andrew Bird and Ezra Furman and the Harpoons(Oh, I guess I checked that out after he left). I just transcribed some stuff for him for later. I need to take some video at some point. That’ll be cool also as I consider doing a guitar book or, whatever it turns into.

It’s been a while since my last entry. I bought a Keeley compressor and a TC Electronics chorus pedal. Finally got rid of my choral/flange. Never liked that pedal and I really tried to. It was even really ugly. Anyway, the last house party gig, the new gear worked pretty well and also did the job at Spring Arbor Free Methodist. I still have to tweek them a bit as I figure out how to use them the best. I’ll get another shot at it in church again.

My Macbook Pro won’t play any sound under my user account but it will when I try under another account. Weird. At least I got that far with the help of my cousin, Matt Engels. He sure knows his stuff.

I’m still learning how to use Komplete 8 Ultimate. I worked with a program called Reaktor last night. It even has a vocoder that I’ll probably never use(now that I said that, I’m sure it’ll come up at some point and then I’ll wish I had spent more time on it…typical). Anyway, it was fun.

Guess I’d better get back to doing something. I hope to start working on some video game stuff more. Oh, I’ve been recording some bass tracks just to get back into that instrument a bit and I’ve really enjoyed it….oh yeah, and Suzanna gave me some homework on Piano. I need to do that.